Event Description
Despite being one of the easiest groups of organisms on earth to observe, birds have baffled humans since they first saw them fly across the sky. While science has made significant strides in understanding their basic biology and physiology, many aspects of birds are still largely unknown: their evolutionary history, their migratory patterns and their intelligence to name a few. This lecture will explore what we know about birds and the large mysteries that remain within the field of ornithology. 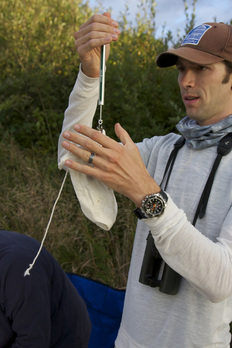 Biographical Sketch
Charles Clarkson developed an appreciation for birds early in life as a child growing up in the mountains of Virginia. He holds a BS in Environmental Science from Mary Washington College, a Master’s in Biology from Virginia Commonwealth University and a PhD in Biology from the University of Virginia.

In the course of earning his undergraduate and master’s degrees he documented the use of elaborate repertoires in male Gray Catbirds to protect paternity and attract mates, and the physiological costs of song production in the Prothonotary Warbler. For his PhD degree he studied the bioaccumulation of mercury in the nestlings of multiple waterbird species. In addition, he quantified the biomass consumed by waterbird breeding colonies in estuarine systems in the states of Virginia and New York.

His extensive experience as an ornithologist has also included: work as an ornithological field and lab technician, maintenance of Mary Washington College’s ornithology museum collection, spearheading a project recording owl demography for parkland surrounding Richmond, VA, and supervising the rebuilding of a population of Red-cockaded Woodpeckers on Camp Lejeune in North Carolina where he banded hundreds of woodpeckers, maintained extensive demographic records, and managed critical habitat for the birds.

After moving to Rhode Island in 2012, Charles taught ornithology, ecology and conservation at Roger Williams and Salve Regina Universities. He also taught ornithology and tropical ecology for the Semester at Sea, leading field excursions throughout Central and South America and in Europe.

Dr. Clarkson is currently the Coordinator for the Rhode Island Breeding Bird Atlas, a five-year project to document the distribution and abundance of all birds breeding in RI. He has authored multiple papers and contributed to book chapters on conservation. He currently serves as Chair for the Waterbird Society’s Conservation Committee and is a member of the Audubon Society of Rhode Island’s Board of Directors.