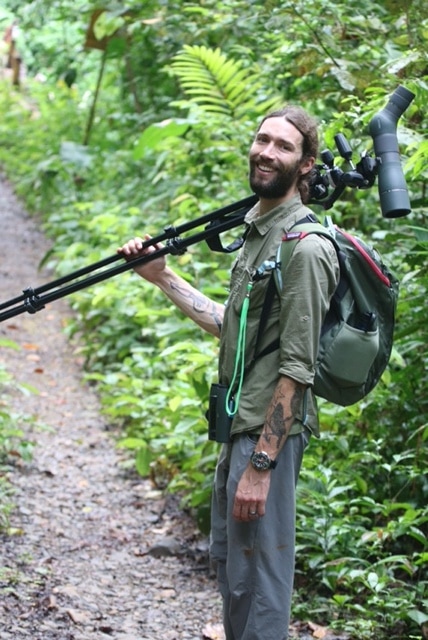 Charles Clarkson was born in the mountains of central Virginia and lived out his childhood playing in the
woods and admiring nature. As an adolescent, Charles began to gravitate towards birds and after his
first college course in Ornithology, he decided that there could be no more satisfying life than one
devoted to his feathered friends.

As an undergraduate, Charles involved himself in multiple avian field studies and quickly enrolled in a
graduate program at Virginia Commonwealth University where he studied the cost of song production in
male warblers. During his time at the university, Charles also spearheaded a project documenting owl
demography in the state and he built and maintained an ornithological museum collection. Following
the completion of his Master’s degree, Charles was employed as a contractor for the Department of
Defense on Camp Lejeune Marine Corps Base in North Carolina. Charles led a team of biological
technicians tasked with re-building a population of endangered Red-cockaded Woodpeckers. He spent
three-years managing habitat and tracking woodpecker groups throughout the Southeast.

Charles returned to school at the University of Virginia to pursue his doctorate in avian toxicology where his primary focus was on the impact of mercury on the growth and development of nestling waterbirds. During his tenure at UVA, Charles began teaching for the Semester at Sea and led students around the world teaching ecology, ornithology and conservation. Through the Semester at Sea, Charles became
involved in projects throughout the tropics educating and aiding small-scale coffee producers about using rainforests in a way that would promote bird habitat and reduce habitat destruction. In addition, Charles worked passionately to reduce the mortality of seabirds by the world’s commercial fishing industry by serving on advisory panels, attending senate hearings and teaching courses in ocean conservation.
​
Charles moved to Rhode Island in 2011 and began teaching at Salve Regina and Roger Williams Universities. In 2015, Charles was employed as the coordinator for the Rhode Island Bird Atlas, a five-year, statewide project aimed at documenting the distribution and abundance of our birds. In addition to coordinating the project, Charles also serves as a board member for the Audubon society of Rhode Island and The Aquidneck Land Trust and as the co-chair of the Conservation Committee for the International Waterbird Society.